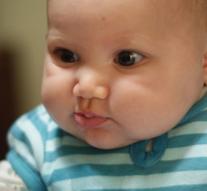 geneve - Worldwide, 41 million children under five are overweight. Obesity among children occurs mainly in Asia and Africa. Has announced that the World Health Organization in Geneva Monday. The WHO calls the figure alarming.

In the previous census this age group in 1990 there were 31 million children are overweight. The United Nations health organization advertising for unhealthy foods is largely on the basis of obesity. It hopes that the Member States wish to take action against it.

The number of obese young children grew especially in countries where incomes are low. Of all children who are overweight, almost half lives (48 percent) in Asia and another quarter in Africa. Incidentally malnutrition among young children often leads to obesity as they age.