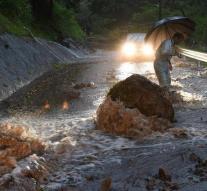 The evacuations are collected in schools and government buildings in higher areas. Near Hiroshima, the police found a drowned 93-year-old man in a river. Meteorologists predict that the heavy rainfall still lasts until Thursday.