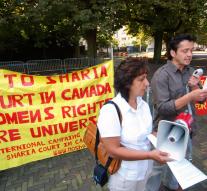 copenhagen - Nearly 40 % of Danish Muslims want a (partial) implementation of Islamic law , the Sharia, in Denmark . This is evident from A research of the Danish newspaper Jyllands -Posten.

According to Danish critics of Islam is the outcome of the investigation ," proof that Denmark has a problem with the number of Muslims in the country. "

Of those surveyed 10 % want to replace the Danish law by sharia, just over a quarter of respondents want a ' hybrid' between Sharia and Danish legislation. In another recent survey, 77 % of Danish Muslims that they thought Islam " must be strictly adhered to ".

Muslims make up about 5 % of the Danish population , making them the largest minority in the country.