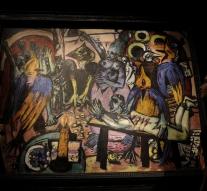 It is about Hölle der Vögel's painting (Hel van de Vogels), which Beckmann began in exile in Amsterdam in 1938, and later finished in Paris in that year. On the canvas are chopped figures and birds visible in bright colors that symbolize national socialism and its victims.