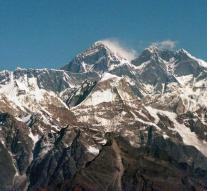 kathmandu - Just below the top of Mount Everest four dead mountain climbers have been found again, Nepalese government reports Wednesday. The deceased climbers were found by rescue workers who were looking for other accidentally injured alpinists. There are two foreign climbers and two local mountain guides.

How the four men came alive is not yet clear. The four was found in Camp 4, just 8000 meters high.

The climbing season has just begun, yet there are nine deaths now. Nepal issued 375 climbing licenses to foreigners this year.