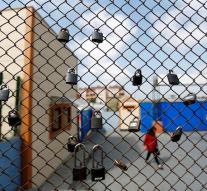 - Turkey's 38,000 inmates put on parole. Minister Bekir Bozda of Justice showed Wednesday via Twitter that the government about issuing a decree.

It is not known release the detainees and the conditions under which that happens. Most Turkish prisons are overcrowded. That problem has been widened by the arrest of tens of thousands of people suspected of involvement in the failed coup attempt mid July.