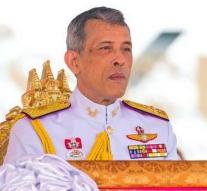 bangkok - A Thai military court sentenced a 34-year-old man to 35 years in prison for insulting the royal house. Wichai Thepwong would have safely shunned the Thai royal house through Facebook. What he did did not announce by the authorities.

Thailand has very severe punishment for majesty. Since the military took over power in May 2014, more than 100 people have already been convicted, especially for expressions via Facebook. The punishment that was distributed on Friday is reportedly the highest so far.