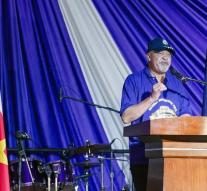 paramaribo - The foster son of Surinam president Desi Bouterse, Roma Meriba, was sentenced to three and a half years imprisonment in connection with robbery in 2015. The punishment fell a lot lower than the ten-year term demanded by the Public Prosecutor. Meriba's lawyer Raoul Lobo is satisfied with the verdict.

Meriba was sentenced to fifteen years in cell for a fatal robbery in 2005. He did not completely imprison his imprisonment because he received a grace from Bouterse in 2011. It was introduced in 2010 as president of Suriname. In 2002 Meriba cast a hand grenade into the Dutch ambassador's garden.

According to the lawyer, the judge has spoken correctly and firmly. Meriba was sentenced for the preparation and planning of the robbery, but not for the other charges charged, such as attempted manslaughter and possession of a firearm. At the police performance in 2015 two robbers were shot dead.

Meriba and the other three convicted persons have been in the cell for more than 21 months.