Home / World / 35 kill by air attacks on IS targets 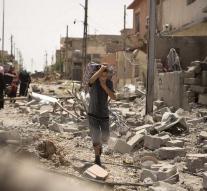 damascus - By two air attacks on Islamic State targets in Syria, there were certainly 35 deaths on Monday morning. Most victims are citizens. The attacks were conducted by members of the coalition supported by the US.

The Syrian Observatory for Human Rights reported that 23 people were killed in the eastern city of Abu Kamal, close to the border with Iraq. Among them are Iraqi refugees and eight children. Near Raqqa, the bulwark of the IS caliphate, twelve women were killed. According to Amaq press office, IS's mouthpiece, it was 22.

In Syria, however, there is a ceasefire, but it does not apply to the territories of the Islamic State terrorist organization and other radical groups.