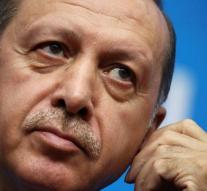 ankara - Four months after the failed coup attempt, the Turkish government put 3,200 police officers back to work. It involves agents who were suspended because of alleged links with the cleric Fethullah Gulen. Which is seen by Ankara as the mastermind of the failed attempt at a coup.

Senior police reported the return of the suspended officers Wednesday to the Turkish state news agency Anadolu. The Turkish government of President Recep Tayyip Erdogan has tens of thousands of employees suspended because of possible involvement in the coup attempt. As research continues from the suspended employees can not be blamed, they can go back to work, otherwise they shall be dismissed.