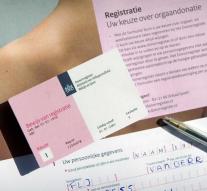 - Since the new donorwet has passed the House of Representatives, giving every week nearly 30,000 people that they want to be a donor. In September, 67 647 people registered with a 'no' in the donor registry.

The large amount of rejection keeps the newspaper supposedly associated with the law adopted on 13 September. Previously enrolled fifty Dutch daily with 'no'. People will not be asked why they make their choice.

If donorwet also passed by the Senate, all the people who do not register automatically after donor repeated calls. Opponents believe that the government in this way restricts the right to self- determination.