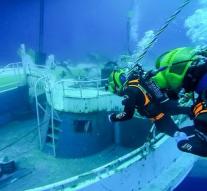 rome - The wreck of the ship that asylum this week was salvaged in the Mediterranean, probably sit about three hundred bodies. That Italian experts have declared Thursday during a meeting of the Italian Navy.

The ship sank in April last year to the coast of Libya. According to estimates based on eyewitnesses were likely more than seven hundred migrants on board. After the disaster were recovered about 170 corpses. 28 people survived the disaster. The wreck was brought to Sicily.

According to experts the exact death toll will be difficult to determine.