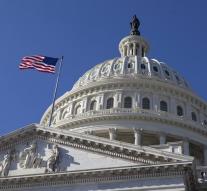 - A sympathizer of terrorist Islamic State on Monday in the United States sentenced to thirty years in prison. The man from Ohio was going with explosives and firearms to attack the Capitol.

The now 22-year-old American was arrested in January last year. This was done according to US media after he bought two firearms and a large quantity of ammunition.

The man had planned to travel to Washington to attack the parliament building during the annual State of the Union address by President Barack Obama. The famous American debt in August on multiple charges.