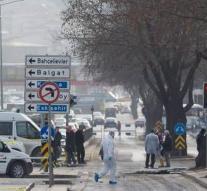 - Turkish public prosecutor has demanded thirty consecutive life sentences against the Kurdish politician Saleh Muslim. The leader of the Serbian-Kurdish party PYD is held responsible for the terrorist attack in February in Ankara which 37 people, mostly civilians, were killed.

Muslim, residing somewhere in Europe, and 67 other potentially concerned are accused of murder and crime against state security. That's Anadolu news agency announced Wednesday. Among the defendants are also leaders of the banned Workers Party PKK as Cemil Bayik und Murat Karayilan.

Responsibility for the attack in the Turkish capital was claimed by TAK, a splinter of the PKK. According to Anadolu informed the prosecutor that TAK does not exist.