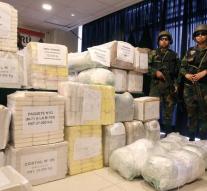 constanta - The Romanian police in the port city of Constanta 2.5 tons of cocaine intercepted in the Netherlands who were on their way.

According to Romanian media is the biggest cocaine catch ever in the Eastern European country. The drugs have an estimated street value of 625 million euros.

The drugs were transported from Colombia to Romania by ship and would be transferred there on a truck bound for the Netherlands. Romanian police have cooperated in the six-month investigation by the Spanish police and the US Drug Enforcement Administration. Six people have been arrested including the leader of the smuggling gang, a Moroccan man with the Dutch and Spanish nationality.