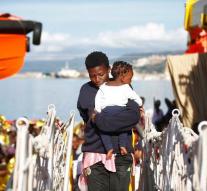 rome - The Coast Guard has rescued Saturday, 2400 refugees bobbing around in boats on the Mediterranean. On Saturday, about twenty rescue operations were carried out, according to the Italian Coast Guard.

According to MSF died in twelve people the rescue of four children.

In recent months, the route across the Mediterranean has become more popular. The refugees stabbing across the sea to North Africa (mainly Libya) to come to Europe. Often they use inflatable boats.