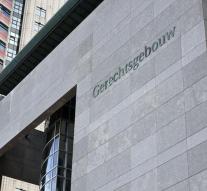 rotterdam - The 39-year-old Amsterdam hacker Sven Olaf K. Monday convicted by the court in Rotterdam to a term of 240 days of which 185 days probation for major DDoS attack in March 2013. That attack was on the network of the US Internet company Spamhaus.

It was one of the largest ever attacks. K. has thus ' the proper functioning of the Internet at risk and thus the interests of many individuals, businesses and institutions, '' said the court.

K. was arrested in Spain in 2013 and extradited to the Netherlands.