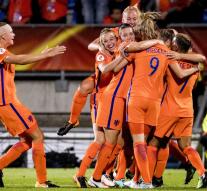 - Over 2.4 million television viewers watched the EK match between the Dutch and Belgian footballers on Monday. The broadcast on NPO1 was the best viewed program that night, reports the Stichting KijkOnderzoek (SKO).

The Dutch footballers have scored three wins for the quarterfinals of the EK football for women. On Monday Belgium won 2-1, previously won Orange from Norway and Denmark (twice 1-0). Those matches were also followed by over 2 million TV viewers.