Home / World / 21 dead in China in explosion at factory 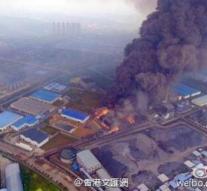 dangyang - In an explosion in a chemical plant in China Dangyang are 21 people killed. Five people were injured, three of whom seriously, according to local media. The explosion was caused by a rupture in a pipeline, through which steam was.

In China, happen with regularity accidents in factories, always blowing the discussion again about the security in the country. In August last year were still 165 people in an explosion at a factory in Tianjin.