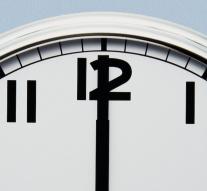 - The year will take longer than usual. A second, to be precise. On 31 December, namely added a leap second. That should prevent the clocks go wrong.

The extra second is controversial because some computer systems can not cope, and paper jams. Thereby passenger airline Qantas for instance could not check in 2012.


The earth rotates in a day on its axis. A second is a day divided by 86. 400. But the old formula is not quite right with the atomic clocks used today. An average day is 86 400.002 seconds. That equates to one second in one and a half years. With a leap Earth can 'discover' the atomic clock.

A leap second is separate from the leap, although the principle is the same. A year is one revolution of the earth around the sun. That does not exactly 365 days, but about six hours longer. Therefore, there is a leap day every four years.