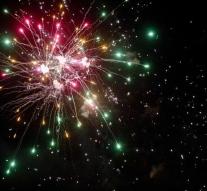 - In the Netherlands it is not so far, but on the other side of the world, the new year has begun. The first places in 2016 has been kicked his Kiribati, Samoa, Tonga and Tokelau in the Pacific.

The New Year 'moves' then continues to the west. New Zealand, Australia and the Far East were the first turn.