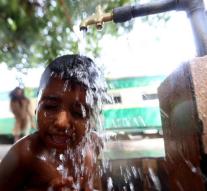 geneve - The year 2015 will probably be the warmest year on record. This is mainly because there have never been so many greenhouse gases are in the atmosphere now. Also this year there is a strong El Niño. This is contained in a report by the World Meteorological Organization (WMO), the UN, which was published Wednesday.

El Niño is a recurring weather phenomenon. It ensures warming of the seawater in the Pacific Ocean, thus changing currents and wind directions and where there may arise the globe extreme weather.

The years 2011-2015 together the hottest period of five years ever measured, with many extreme weather events such as heat waves, resulting from climate change. The average temperature is now one degree higher than in pre- industrial society. That is a milestone, but not positive, according to the WMO.