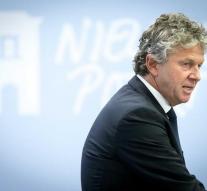 - In order not to restrict the choice of the leader of the approximately 45,000 party members, anyone can become a member of the Labour Party for 2 euros per month. They then get a few days to vote, said a spokesman for the party confirmed the AD an alert Friday.

The party is hoping in this way to involve people in the elections who feel related to the party or who are already thinking about the party membership. Abroad has already gained experience with this method of voting.

Give voting rights to non-members as Monasch will can not, the spokesman said. According to him, it is not a response to the call of Monasch. This had long been decided. ' This rule can not be in two days. '