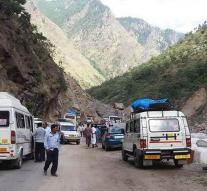 new delhi - A landslide in the north of India blocked the access road to an important Hindu temple. Some 1800 visitors, often pilgrims, can not afford to get along with their car, so the authorities in Uttarakhand said.

The ground has shifted due to persistent heavy rainfall. Later on Saturday the road will be released again. Helpers handed out food and water to the people stuck in their cars.

The Badrinath Temple on the border with Nepal and Tibet attracts tens of thousands of visitors annually.