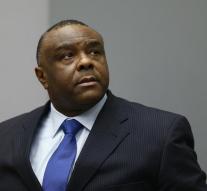 - The International Criminal Court (ICC), the former Congolese vice president Jean-Pierre Bemba Tuesday sentenced to eighteen years in prison. He was found guilty in March of crimes against humanity because militiamen have killed under his command and raped in the Central African Republic.

It is the first time that the ICC focuses on rape as a war crime, and the first time anyone has been convicted because others under his command were committing crimes.

Bemba sent between October 2002 and March 2003 about a thousand fighters to the neighboring country to help crush a coup attempt.