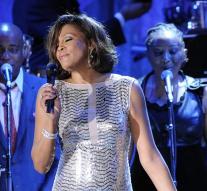 - A pair of bespoke shoes of Whitney Houston on Friday raised at an auction in Beverly Hills converted 18,000 euros. The singer died in 2012 at the age of 48.

For her passport in 1985 a fan placed over 10. 000 down. Also for the music awards which Houston won during her career, was a lot of interest. In total were sold over one hundred of the singer personal belongings. According sister in law Pat Houston was the time that the family shared Whitney with the memories of fans of her music.