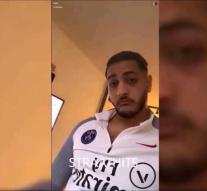 rotterdam - The Public Prosecution Service has claimed sixteen years in prison against 25-year-old Sidar D. because of the murder of Parsa Mahboud in the Rotterdam district Ommoord. The 21-year-old Mahboud, known on social media as rapper and cult figure 'Parsa010', was shot dead during a barbecue on May 28, 2017.

According to witnesses, Sidar D. acted with someone else in drugs and Parsa was the one who paid for them money to customers who had not paid. That went well, until Parsa demanded a higher reward for his services.