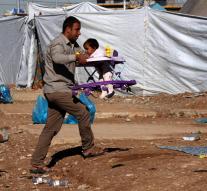 - This year there are more than sixteen million babies born in conflict areas. According to figures from the UN children's organization UNICEF, which Thursday published. According to the organization, one in eight children born into a war zone.

In total, 246 million children living in conflict zones, which can be a disadvantage in their lives. Newborn children and their mothers are, according to UNICEF enormous risks in conflict areas and during dangerous journeys to escape from it.

Moreover, there are pregnant women in conflict areas to give birth risk without medical assistance and in unhygienic conditions. The chance that their children die before their fifth birthday is therefore greater. Newborn children also often experience extreme stress and anxiety that can slow down their development, according to UNICEF.

Also poverty, climate change impacts and the lack of opportunities ensure that children are increasingly vulnerable, reported the children's rights organization. Figures from UNICEF show that have applied in the first nine months of the year 200 000 children asylum in European countries.