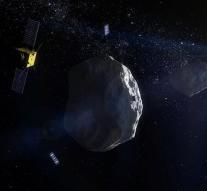 - Scientists have already found 15,000 asteroids hurtle through space and ever strike the earth. And the total number of space rocks is probably much higher. The European Space Agency, announced that participates in the study, the number is Thursday.

Three years ago, the count stood at 10. 000. ' We discover an average of thirty new items per week. A few decades ago we found thirty in a year, '' says ESA. That rate may go up as new advanced telescopes in use.

In our solar system, more than 700 000 asteroids. Most are far away and never come close to the earth. But some of it is in our area. These are the Near-Earth Objects (NEOs).

The chances are very small that strikes one of these objects in the next forty years. But according to ESA all NEOs should be monitored to find out where they go.