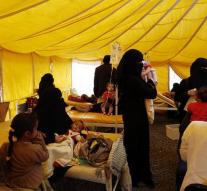 aden - The number of deaths due to a cholera outbreak in Yemen increased to 1500 in early July, according to the United Nations World Health Organization (WHO). Nearly 219,000 people are ill.

It would be the worst cholera outbreak worldwide. Due to the civil war in the country there is a lack of good sanitation and drinking water.

Cholera is an infectious disease caused by a bacterium. The symptoms are diarrhea and dehydration. Polluted water is the main cause of the disease. Cholera is good to fight if the disease is recognized in good time.