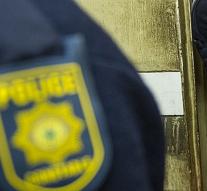 - A court in the South African city of Pretoria on Wednesday eight officers each sentenced to fifteen years in prison for the murder of a taxi driver in 2013. The officers tied the 27-year-old Mozambican his car and dragged him through the streets of Johannesburg. Reason : he had his car parked wrong.

The taxi driver dies later in a police cell. " ", Barbarian called the judge's murder in his judgment. The police had no life because they had a good track record.

The murder was captured on film and was seen on the internet.