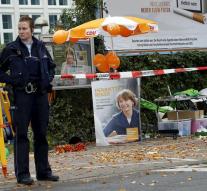 - The court in Dusseldorf on Friday fourteen year sentence imposed on the man who stabbed in October mayoral candidate Henriette Reker in Cologne. The court declared the 45-year-old Frank S. guilty of attempted murder.

S. was the attack on Reker known, but said he did not intend to kill her. The prosecution had demanded life to him.

The non-party Reker was on October 17, a day before the election, stabbed with a large hunting knife in the neck. The 59-year-old kept hovering on the brink of death and was in a coma for several days. Eventually Reker won the election. She accepted her office while she was still in the hospital.


S. perpetrator, a right-wing radical, was previously three years in prison for various assaults. He stated his disagreement with the German refugee policy, which was also supported by Reker.