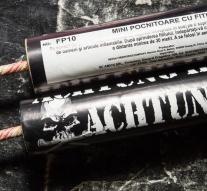 - A fourteen year old boy Berlin on Tuesday in Frankfurt an der Oder arrested with 114 kilos of illegal fireworks. He planned to bring contraband on a pallet truck to his home in the Wedding district.

The enterprising lad had bought in the Polish city of Slubice 8600 heavy and dangerous gun battles, packed into nine boxes. He allowed himself a taxi to the silent station Frankfurt Rosengarten, just across the border, transport with the intention to take the slow train to the German capital.

The driver did not trust the matter is not and alerted the police. It came quickly look what's coming out of the trunk and took the suspect to the police station. It will be violation of the explosives rules are accused and illegal imports.