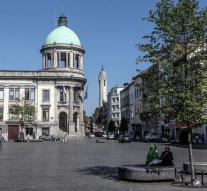 brussels - In the Brussels district of Molenbeek is Tuesday arrested a 14-year-old with a backpack full of explosive material, reports the newspaper La Dernière Heure.

The boy was part of a group of young people that hung on a building site near Brussels-West. Officers saw smoke at the construction site and decided to check the young. One of them was found explosive material with them. The bag also contained a bottle that says 'Allah Akbar' on it.

Research by his computer revealed that he had wanted several times on the Internet for tutorials to create a bomb. The teenager would have defended himself by arguing that he is a fan of video games and chemistry.

A spokesman for the Brussels public prosecutor calls the condition of the boy 'extremely worrying'. He is stuck and will be further interrogated. The other three youths were released.