Home / World / 1300 arrests in major US action against criminal gangs 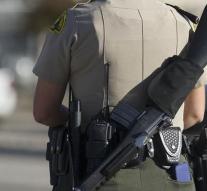 washington - In a major action against criminal gangs, the US authorities have taken over 1300 arrests in six weeks. CNN reported Thursday that no such large-scale operation in the US has been taken against gangs before.

Although the ICE immigration service led the operation, the action was not fully aimed at migrants. Among the detainees were over nine hundred US citizens. A number of detainees were a member of Mara Salvatrucha (M13). That's a gang of young criminals who are active in El Salvador and other countries in Central America.