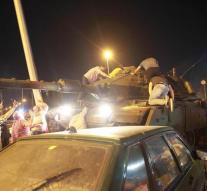 ankara - In connection with the attempted coup in Turkey, more than 130 people arrested, reported the Turkish Prime Minister Binali Yildirim Saturday morning early in the morning.

According to the prime minister are practically all parts of the armed forces again under the command of the loyalist officers. That does not apply to all parts of the Air Force. There are devices that are controlled by the coup plotters said Yildirim. They might goals in Ankara and Istanbul under fire. He gave the order to shoot down the aircraft.

When the coup was slain according to Yildirim one of the generals involved.