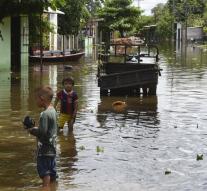 - An estimated 130,000 people are due to heavy rainfall and high water levels in the South American Paraguay on the run from the water. The large flows of the rivers Paraguay, Paraná, and Uruguay Quarai entered by the extremely wet weather far beyond their banks and cause a nuisance in their catchment areas in Argentina, Brazil, Paraguay and Uruguay.

Paraguayan media reported Saturday that in the capital Asunción more than 90 000 people in the water were forced to leave their homes. Elsewhere, an estimated 40 000 people fled to higher ground in the country.

The Argentine city of Concordia, almost 350 kilometers north of the capital Buenos Aires, is largely under the water of the river to allow Uruguay to come. In Argentina, about 20 000 people were evacuated from homes near rivers.

The rains began December 18th. Various media speak of the worst flooding in the region in at least thirty years. The cause could be the natural phenomenon El Niño.