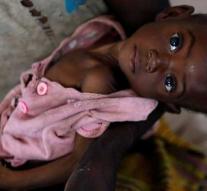 kinshasa - The number of people in the Democratic Republic of Congo suffering from severe hunger has increased explosively as a result of the ongoing conflicts in the country. More than 13 million people no longer have enough to eat, compared to 7.7 million last year. Approximately 6 million children in Congo must be considered undernourished.

This is the conclusion of a report from the IPC institute, which investigates the food supply for UN organizations and other aid workers worldwide. In Congo, there has been a war between the government army and rebel forces for more than two years.