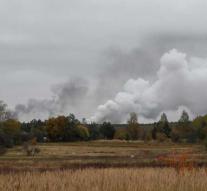 kiev - More than 12,000 people were evacuated Tuesday morning from a large area in the north of Ukraine where explosions occurred in a munitions depot. Until the noon, fires were reported on the spot of disaster, Russian media reported.

The explosions occurred on a military site near Itsjnia, about 135 kilometers northeast of Kiev. The entire region is closed and the airspace is closed. There is damage to buildings around the warehouse, but according to the Supreme Command of the Ukrainian forces there have been no reports of victims.

Because the explosions occurred in different parts of the ammunition depot, the Ukraine authorities think that there is sabotage. It is not the first time that a weapon store in Ukraine is hit by fire. The country has pointed to Russia in the past with an accusing finger.