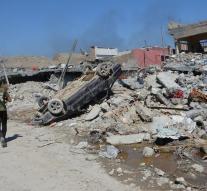 mosul - In the Iraqi city of Mosul have so far taken the bodies of 112 people from the rubble. The building was last week the target of a US attack on fighters from Islamic State (IS), CNN reported Monday.

'The large number of deaths does suspect that civilians are among the victims,' ​​said an employee of the Iraqi Ministry of Health. The United States has not yet responded to the statements of the employee.

The attack is still much uncertainty. The Iraqi army and the United States accuse IS of having the building blown up with a truck full of explosives.

In a statement Sunday represents the military that there is no evidence that the building collapsed by recent air strikes by the US-led coalition. Not far from the house found a military car bomb.