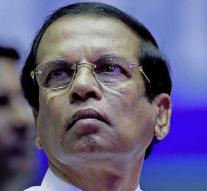 colombo - A vacancy for executioner in Sri Lanka has led to 102 applications. President Maithripala Sirisena announced last year that the death penalty for drug offenses would be reintroduced after decades. Previous...

Among the 102 candidates who responded to the vacancy is one American. His registration was rejected, because foreigners in Sri Lanka are not eligible to hang people. That says a spokesperson for the prison service.

Drug trafficking is a crime in Sri Lanka. No one has been executed since 1976, because the punishments were then converted to life-long prison sentences.