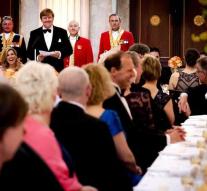 brunssum - The hundred of Brunssum's wife who recently dined with King William Alexander because of his fiftieth birthday died shortly thereafter.

Ernestine Richardson-Bryan was born on the Antilles on April 27, 1917, celebrating her hundredth birthday on the day the king became fifty. Hence, she was one of the 150 'fellow' guests at dinner with Willem-Alexander and Queen Máxima in the Royal Palace in Amsterdam.

The Limburg died on Liberation Day, one week after the festive dinner, in the nursing home where, due to her deterioration, she had been bedridden for a while. 'Still, she absolutely wanted to be there for dinner,' her daughter Yvette told Monday. That's why she was taken to Amsterdam by ambulance, the last piece of police escort.

'She did everything consciously and enjoyed her royal welcome every minute. Only in the end she was on, 'said the daughter. 'My mother wanted to live fully and this was also her last wish. '