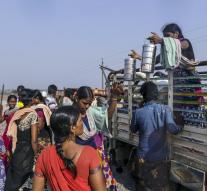 - If climate change is not a quick halt, poverty is increasing in the world. Another hundred million additional people will live in poverty than in 2030. The World Bank wrote Sunday in a new report.

The organization warns that there will be no end to poverty and climate change is tackled seriously. Poor people are, after all, already vulnerable to problems caused by global warming. This is because for example, crops fail due to drought or due to diseases caused by heat waves and floods have free reign.

" The future is not set in stone ", said Stephane Hallegatte, an economist who contributed to the poverty and climate World Bank report. " We now have a chance to achieve our goals, but we must now make wise policy choices. "

The United Nations organized from late November to mid-December climate summit in Paris. 190 states then come together to work on a new climate agreement. Purpose of the 21st climate is to keep global warming below two degrees Celsius. That should heatwaves, rainstorms and floods that occur can disrupt food and water supplies. Also the creeping rise in global sea level is counteracted thereby.