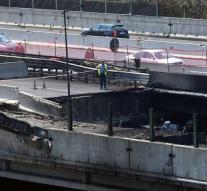 bologna - The devastating explosion of a road tanker on a motorway in Bologna caused damage of 10 million euros. According to the Italian news agency ANSA, this is the estimate of the local authorities.

Alderman Alberto Aitini said that especially two car dealers were badly hit. As a result of flying, burning fragments, numerous vehicles went up in flames on their terrain. They represented a combined value of 5 million. Shops, homes and two schools in the area were also seriously damaged.