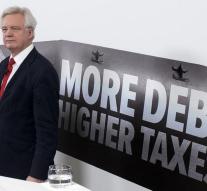 london - The United Kingdom will continue asking for a 100 billion euro compensation from the British from the negotiations on brexit steps as the European Union (EU) continues. That's what British prime minister David Davis said in a Sunday interview with The Sunday Times newspaper.

'Even a compensation of 1 billion euros is already a lot of money in my eyes,' says Davis. The EU and the United Kingdom have been discussing the conditions for a country departure from the EU for weeks.

The President of the European Commission Jean-Claude Juncker has previously called a 'minimum amount of 50 billion euros'. The British newspaper Financial Times came in a calculation of about 100 billion euros, but a survey commissioned by the British Government by the Institute of Chartered Accountants came to 5 billion euros.