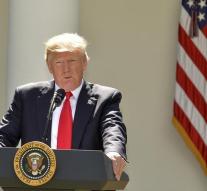 geneva - Due to the United States' exit from the climate treaty of Paris, the temperature on Earth at the end of the century may have risen 0.3 degrees Celsius more than was expected so far. The WMO, the United Nations Meteorological Service, reported that Friday, and at the same time placed some comments on that forecast.

A WMO spokesman said that it is an estimate because no studies have been developed for global warming research that took into account the termination of the Trump climate treaty. It is also unclear what the decision of Trump means for greenhouse gas emissions in the US.